Whilst browsing archive.org, I discovered an odd little publication titled Humanitarian Philosophy, published back in 1912. I liked it so much that I decided to make a print-it-yourself version, which can be downloaded from this page. I also included an instruction guide to help you print it out right.

But, you may ask, what is this thing? Well, it's a 48 page booklet collecting various writings by one Emil Edward Kusel. It begins with this declaration:

No doubt some of the conscience-stricken readers will brand the author of the sentiments herein as an extremist rather than a humane enthusiast, but bethink yourself it is far better to be "an extremist" on a logical, noble basis than to be inconsistent under false pretense.

Ah. With a disclaimer like that, we're certainly in for something juicy. And lo and behold, the author is a ... vegetarian! How vegetarian is he, you may ask? Here’s a quote:

From a spiritual conception, it is just as reasonable to recommend human cannibalism as the eating of butcher shop carrion.

As you may have noticed, he's not exactly subtle. There's none of that moderate crap we get from todays vegans. Oh no, this is a man on a mission. Another quote:

Dancing, theater-going, rag-time music, and all other pleasures to kill the monotony of daily routine, are under the ban of the churches. We carry ourselves aloof from these awful (?) sins and walk in the attitude of solemnity to impress Almighty God with our piety. We preach against liquor and tobacco while we ourselves are addicted to the use of tea and coffee (stimulants). We condemn everything we ourselves do not care for and we jealously admonish others to be just like us. Now if dancing, theater-going, rag-time music, etc., and the immoralities of life are sins of venial proportion, of what colossal magnitude must be the sin of taking life we cannot restore and how immeasurably hellish are the churches that uphold the killing in the name of a merciful God!

At this point, I should probably point out that the author, despite his religious arguments, is in fact an atheist. While he focus hard on his vendetta against "flesh food", the booklet is sprawled and random, shifting between quotations, biblical passages, the golden rule, the death penalty and replies to letters condemning him to the eternal fires of hell. It kind of feels like a look into social media anno 1912.

Despite the hyperbole, something about his argumentation just connected with me. Perhaps because his writing is more spiritual compared to what we see today. It's not that I have become a vegan, but I feel like, hey, it kinda makes sense.

Download and print from the links below, or see the original on archive.org! 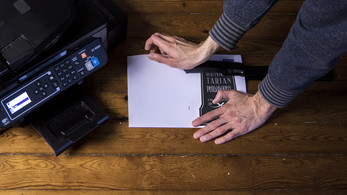 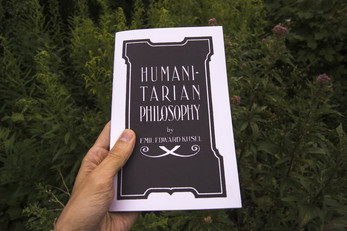 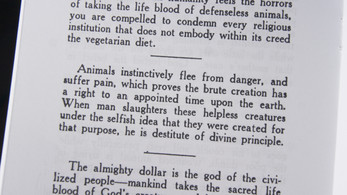 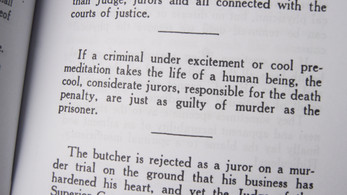